Making the grade: Academic results won’t necessarily land you the job anymore. It’s no longer enough to fill your CV with impressive grades. Employers are looking beyond qualifications to figure out what other skills their candidates have.

Cognitive skills in topics like maths and English have long been used as to measure the calibre of a job candidate. But a report by The Hamilton Project, an economic think-tank, says that non-cognitive skills are also integral to educational performance and success at work – and are becoming increasingly so.

The report says that, to a certain extent, those soft skills inevitably depend on people’s personality: “some individuals have an inherently easier time getting along with others” for example. They are also closely linked to the level of education a person has received, as well as that of their parents.

However, these skills can also be taught, says the report.

The Hamilton Project referenced a survey of hiring managers in the US, which suggests that they are just as worried about finding people with the right non-cognitive skills as with more traditional and measurable abilities.

Why is this important?

The Hamilton Project argues that non-cognitive skills are crucial for the labour market for four key economic reasons. 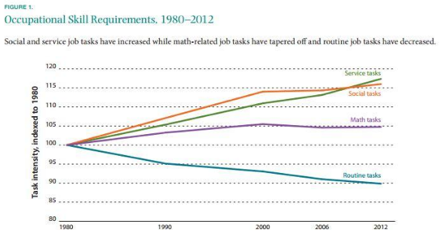 This graph shows that tasks that involved working with or for people – requiring better non-cognitive skills – are substantially more important today than they were in the 1980s and 1990s. Tasks such as social skills and service skills have grown by 16 and 17% respectively, while tasks that require high levels of maths have only grown by 5%.

Some companies are indeed bypassing qualifications altogether and using their own methods of assessing a candidate. In 2015 the global accountancy firm Ernst & Young said that they were going to use their in-house assessment programme and numeracy tests. “At EY we are modernising the workplace, challenging traditional thinking and ways of doing things. Transforming our recruitment process will open up opportunities for talented individuals regardless of their background and provide greater access to the profession,” says the company.

The World Economic Forum Future of Jobs report argues that emotional intelligence, creativity, and people management will be among the top skills needed for jobs in 2020. “Change won’t wait for us: business leaders, educators and governments all need to be proactive in up-skilling and retraining people so everyone can benefit from the Fourth Industrial Revolution,” the report states.